Hey everyone, this Walt Pourier Executive Director with a personal update from the Stronghold Society… as you know its been a trying few years for everyone with the state of the world and all the struggles we all faced… Stronghold has been keeping the work moving all through the hardships, establishing great relationships and together amazing outreach has been accomplished. We are very grateful for all the continued support in all our outreach efforts… we truly couldn’t do all we do without your support.

Major big moves ahead, and we’ve spent this time to work and grow our capacity to better absorb the amazing updates to come, 2022 and beyond is going to be EPIC! and our outreach will grow 10 times the size very quickly so to create more programs and develop more skateparks all across Native Country through our Stronghold Society skateboarding, music and the arts initiatives. Thank you for all you do and for being a part of this amazing movement! Together we can, and together we are making a difference. I am forever grateful.

Posted in News | Comments Off on UPDATE

Let us put our minds together.

It IS said that once spoken, a sound never dies. Like ripples on the water, it reverberates on and on and finds harmony with all that it touches. This rhythm helps us as a people to set events in motion.
It was also said by one of our visionaries…

“Let us put our minds together and see what kind of life we can make for our children.”  — Sitting Bull.

We can live up to the ideals of our visionaries by taking that step, together… and by doing so, give our children “a voice”… this voice is carried out through the power of our word, this is the sound… the power of this sound that has been heard throughout our generations.
It vibrates in the rhythm of all we are today.
This sound, is the feeling of all we represent, all of life connected… that feeling is the language to the soul… to our center, that within each of us… that which connects us to all that is… this keeps us, as a people, in harmony with each other.
Keeps us in sync with our past. 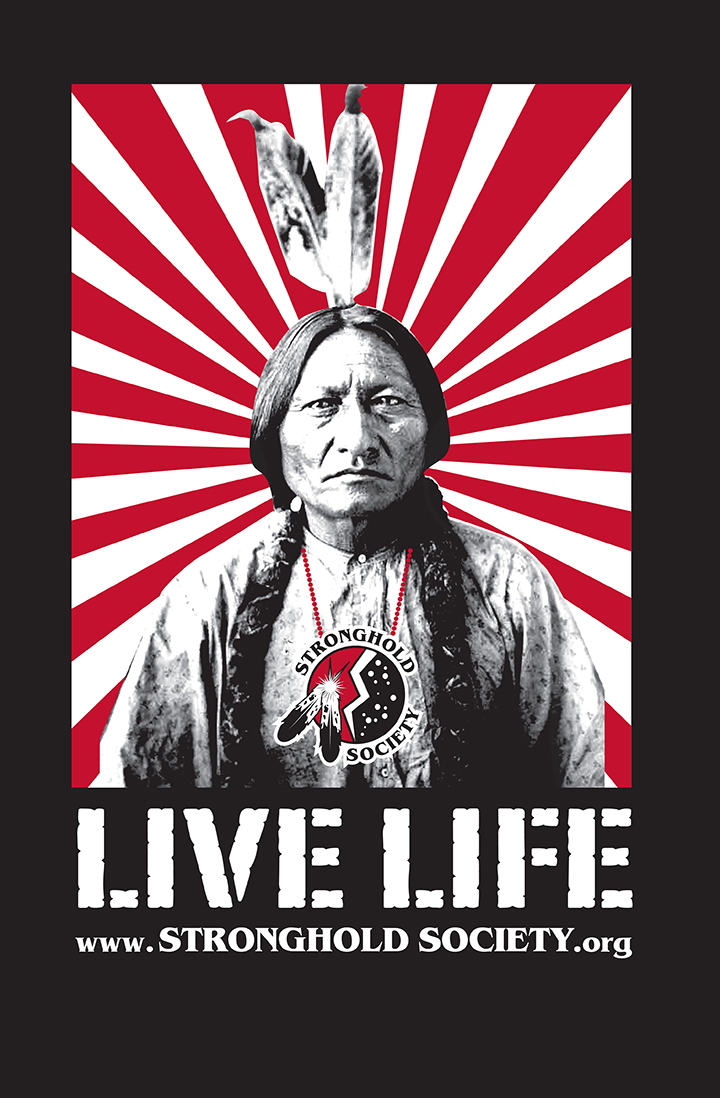 Posted in News | Comments Off on Let us put our minds together.

In memory of Mark “Monk” Hubbard

Like so many others, we were in shock and our hearts hurt with the death of Mark “Monk” Hubbard. Our Stronghold Society Family has been in prayer for his family. Monk is survived by his wife and 3 children. We want to thank you Monk for loving our Lakota children and building them quality skateparks. You created safe spaces for our children and your heart and passion helped us to do the outreach work we do… inspiring through Skateboarding, Music and the Arts. We are forever grateful… your memory will forever live in Lakota Country… our hearts ache. @grindlineskateparks @grindlinetheband 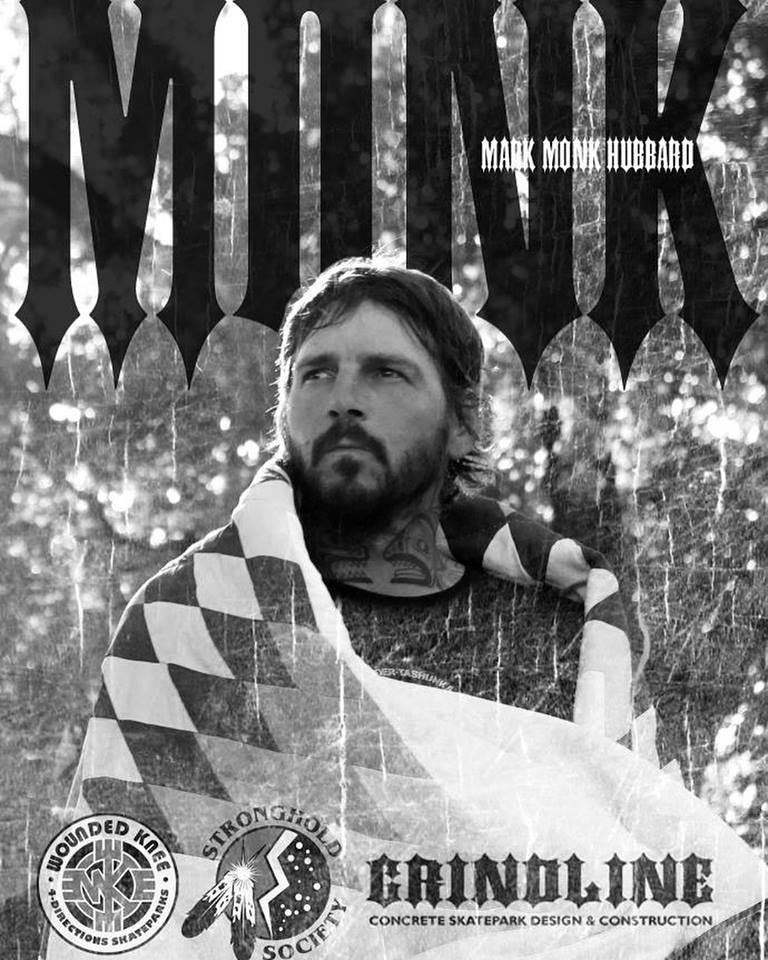 “STRONGER TOGETHER” is a special documentary short directed by filmmaker Scott Soens and produced by Ely Key and Up Mountain Switchel, the film documents Up Mountain Switchel’s work with the Stronghold Society building skate parks, cultivating leadership development, and creating art programs on Native American reservations.

Through this new partnership, a portion of every purchase of an Up Mountain Switchel beverage directly supports skate parks, art programs, and real impact.

“As a company that is founded upon a heritage recipe that goes back hundreds of years, it is really important to us to be able to honor indigenous communities,” says Up Mountain Switchel Founder Ely Key. “We are beyond thrilled to support the Stronghold Society in creating leaders of the future within Native and non-Native communities who are able to share the power of indigenous knowledge to inspire strength of mind, body and spirit.”
The launch of the official partnership between the two organizations is catalyzed by this release of Up Mountain Switchel’s documentary short on the innovative partnership created by Scott Soens, a highly regarded cinematographer, photographer & director for the surf industry who shoots for Patagonia and other industry leaders.

Up Mountain Switchel: https://drinkswitchel.com/
・・・
You. Us. Stronghold. Together.
Song: Smillin
Artist: Northern Cree

Posted in News | Comments Off on STRONGER TOGETHER 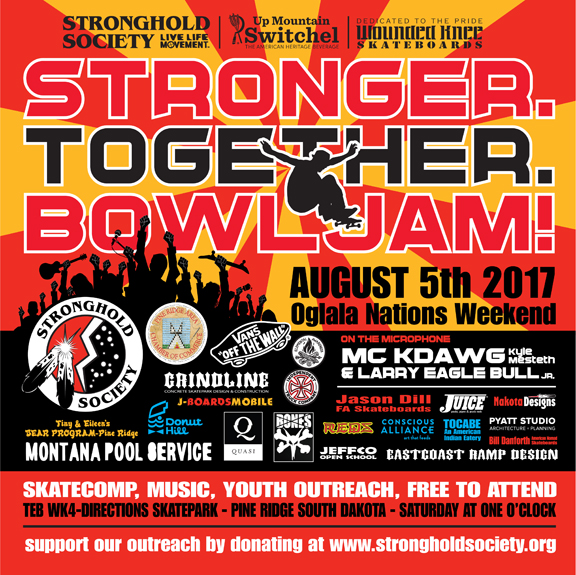 Posted in News | Comments Off on STRONGER.TOGETHER.BOWLJAM

For the artists, the alumni residency offers a unique opportunity for cocreating. Though they work with their own unique mediums and styles, the trio was quick to find a central theme for this residency: art as a call to action and a catalyst for change.

Their exploration of this theme will drive a variety of joint projects including talks, tours, and workshops at Untitled Final Fridays (May 26, June 30, July 28, August 25), demonstrations at Free First Saturdays (May 6, June 3), and hands-on artmaking at the Friendship Powwow and American Indian Cultural Celebration (September 9).

Great perspective on the Manderson Build in 2015.

Check out TransWorld production of our LEVIS Skateboarding / Stronghold Society​ story in 2015… nailed it. It is all about our youth… support them, instill some hope, inspire them… its a beautiful thing we got going on in Lakota Country… lets spread this across to other nations as well… Thank you always for your continued support, big things ahead in 2016. Lets rock!

Posted in News | Comments Off on Great perspective on the Manderson Build in 2015. 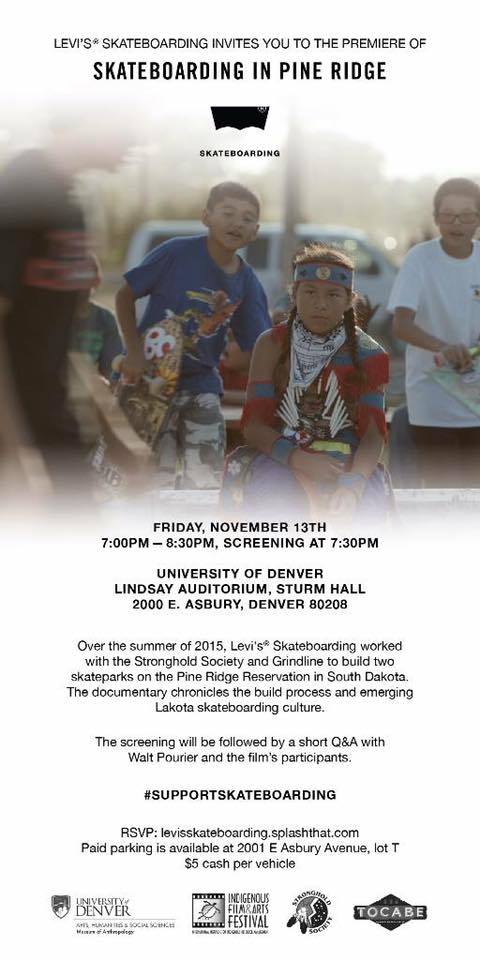 Posted in News | Comments Off on THIS IS GONNA ROCK!!!!

LEVIS support of our LIVE LIFE Call To Action Campaigns

Such an honor to have LEVIS support of our LIVE LIFE Call To Action Campaigns.

Levi’s Skateboarding proudly presents: ‘Skateboarding In Pine Ridge’, a documentary directed by Greg Hunt chronicling the skatepark build at Pine Ridge, South Dakota. Pine Ridge is largely reported in the media as an impoverished community with a drug and alcohol epidemic and teen suicide rates seven to ten times greater than the National average. When the Levi’s team visited the reservation, they saw a community transformed. They found a generation inspired – a group of people championing each other through their collective actions.